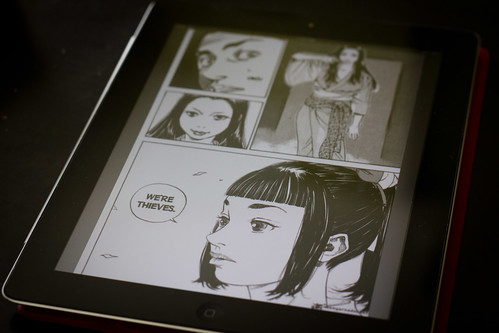 A bit of history

Depending on how you look at it, digital mangas are either way beyond the american comics offer, or way behind. That’s because mangas and anime always had a vibrant “ethical piracy” scene, with scanlations and fansubbing. Most of the productions coming out from Japan or elsewhere in Asia historically, well…, never came out of there. It was impossible for fans anywhere else in the world to read those books or watch those TV shows. As a result, a community of translators, scanners and recorders was born.

That community was originally dedicated to supporting the original authors, however: whenever a specific series was licensed in the USA, the scanned manga or recorded TV series would be removed from the servers, and visitors would be gently redirected to the website of the company who licensed the product.

Of course, it didn’t take long for the community to branch up in several groups that would not necessarily follow that rule – whether it was because they catered to fans from other countries than the USA (there’s a lot of those) or to people who just want free shit (there’s even more of those).

Because of this pretty exhaustive free offer of digital mangas, the licensed and legal offer took a long time to materialize and, to this date, is still in its infancy.

As far as I know, the only available apps for legal digitial mangas on the iPad are Viz Media, Yen Press and Digital Manga Publishing (DMP). A couple more apps are available in the USA, like the Kodansha app, but not here in Canada – which shows how short-sighted some of those publishers are.

Some other publishers are at the bottom of the well. Square Enix, for instance, only offers to read your purchased book on your PC, as far as I can tell, and their website’s user interface is horrible – and I’m not the only one who thinks so. To give you an idea: it doesn’t even work in Google Chrome.

Worse, most of those previously mentioned apps are only available on iOS: only DMP’s app is available on Android. The other publishers’ books can sometimes be accessed via their website, but not always, which is bad. And when it is, it will mostly be Flash-based readers, which means that even on a good Android tablet your reading experience won’t always be optimal.

If that wasn’t enough, some publishers also handle purchases differently on the web and on the iPad, which means that the e-manga you bought may only be readable on one platform and not the other – this alone deserves a “worst idea ever” prize. 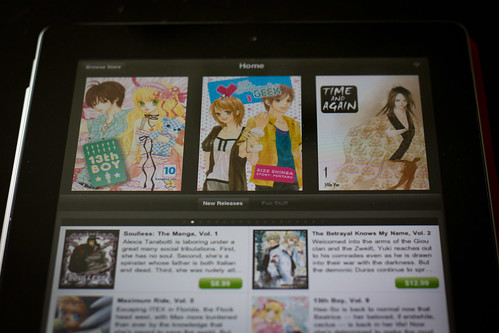 You think it couldn’t get worse? Check this out: the Japanese Digital Comics Association is trying to reach out to its worldwide readers with an initiative called JManga. It’s a very nice idea: offer all their collective books through a unified web store… but if you go check it out, you will likely get a headeache – and also wonder if the website is legit because it looks like a spam/porn website run by Russian pirates. Also, as far as I can tell, there’s no iOS or Android app, which makes it useless (although some people are really dedicated to make it work). 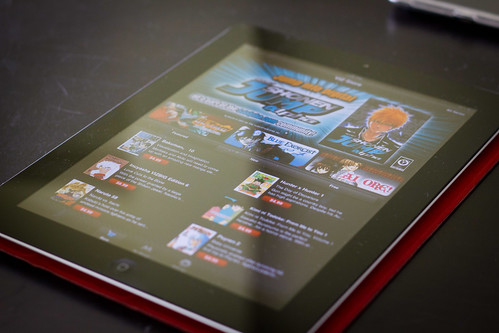 Overall, if you want a precise review of what apps are worth your time and money, you can read Manga Bookshelf’s “Going Digital” articles, like for example their “Manga on the iPad” wrap-up article from a couple months ago… but to be honest, I can’t find anything to be good enough at the moment.

The Viz Media app is the only promising one so far – it does what you expect, the interface is pleasant, the catalog is decent, and the prices are fair. The other apps, however, still suffer from various combinations of bad user experience, limited catalog, and digital mangas priced higher than their print counterpart.

The less than legal apps

Now given the little history lesson I gave in the introduction, you’re probably expecting a lot of apps offering scanlations on Android, and none on iOS (because Apple would be censoring them, right?) Well, not really. For some obscure reason, Apple approved several dozen apps and never looked back. 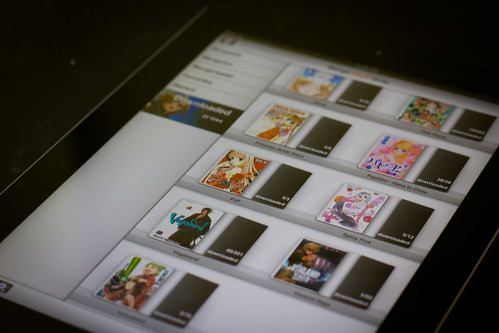 All of those apps, however, have something in common: they all get their books from the same sources, namely MangaFox, Mangable and Mangareader. This means they all have similar catalogs, with similar quality, so the only differentiator is the user experience. 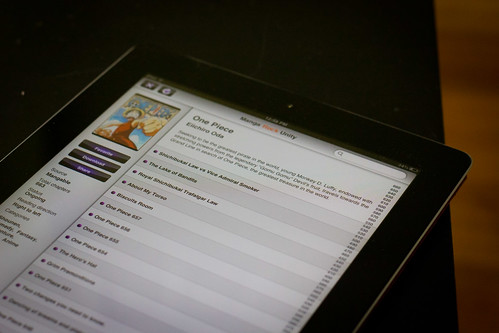 As far as the iPad is concerned, the best app in that category was, hands down, the “MangaRock” collection of apps from Not A Basement Studio. It’s a bit confusing at first, because there are 3 apps, and it’s not obvious which one does what, so I’ll save you the trouble of finding out:

At the moment, there is absolutely no incentive or advantage for you to read 100% legal digital mangas except for the warm and fuzzy feeling of being honest and spending your cash. If that’s you, then try the Viz Media app and its web counterpart – none of the other ones are worth your time and money for now.

For the other series not owned by Viz, I couldn’t recommend anything else than MangaRock Unity or, you know, the legal dead-tree real-world-space-taking book. The quality of the average scanlation is usually well below that of an official e-manga, and the translations are, at best, full of typos, but it’s good enough, especially if you just want to try something before buying the printed book.