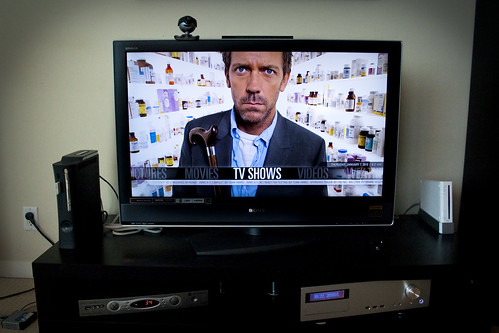 I’m still using an HD PVR (bottom left in the photo above) provided by my cable & internet provider, unlike some people who built their own PVR or cancelled their cable subscription altogether. The reason is that up here in Canada, we don’t have a lot of options for streaming or downloading legal content yet. It’s particularly frustrating because we get channels like NBC and such that proud themselves in telling you, at the end of the show, how you can go on their website to watch episodes you missed… only to get a cold “sorry, this content is not available in your country”. Anyway…

So I have an HD PVR for recording shows. I never, ever, watch live TV. Having to wait through commercials is too painful. I’m looking forward for the time when there will be no TV channels anymore – just direct subscriptions and downloads from content producers, similar to how we don’t listen to music through the radio anymore. Well, some people still do, but I don’t, and that’s made possible by the new platforms. Now if only a Zune Marketplace could open in Canada… but I digress again.

For the digital content we do have access to in Canada, and for my growing collection of converted DVDs and CDs, I have a Media Center PC.

Similarly to how I don’t watch live TV anymore, I’m in the process of not watching real DVDs anymore (all my CDs have already been converted a long time ago). Because yes, it takes too much time to locate the correct case, open it, remove whatever disc was previously in the tray, locate that other case, put the disc back, put the case back, put the new disc in, load it up, wait through the incredibly enraging and often non skippable segments including very long logo intros, anti-piracy shorts, and sometimes even commercials, and then wait for the stupid main menu animation to finish so you can click on “Play Movie”. I prefer to just locate what I want to watch in a list and press “OK”, thank you very much. 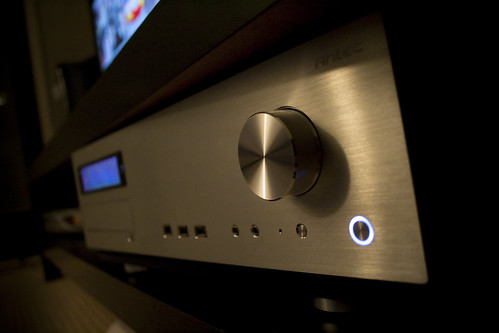 So this, above, is my Media Center PC (you can spot it at the bottom right in the first picture). I built it last spring, and if you want all the facts, here’s what’s inside the Antec Fusion V2 case: 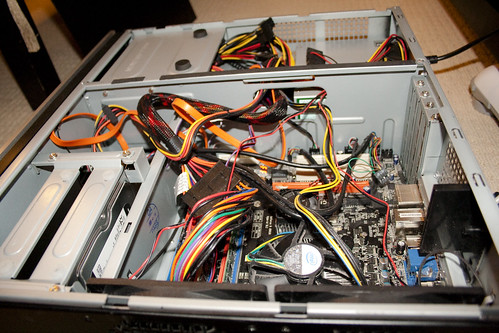 For roughly the same price as a Mac Mini, I get a bit more power, more RAM, a Blu-Ray drive, 1080p HDMI output, wireless keyboard and mouse, an IR receiver that works with any remote, and the freedom to upgrade it over the next years (what I don’t get is WiFi or customer support though). Sure, the Antec case is huge and not so sexy, but it’s quiet as hell. The fridge from the kitchen is noisier than the PC, actually.

The center piece is XBMC. 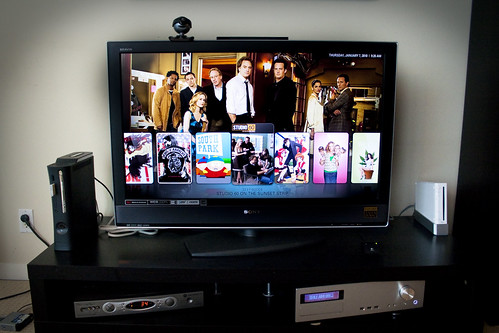 Oh, God, this is one beautiful piece of software. And it becomes truly awesome when you slap a skin like Aeon on it (although I need to upgrade and checkout the new 9.11 default skin).

I’ve been using XBMC for several years, all the way back to my original modded XBox, and although I sometimes look back, I never find any other similar program that’s even half as good. XBMC is just the right balance between a user-friendly “it just works” and an open-source “tweak the hell out of it”. 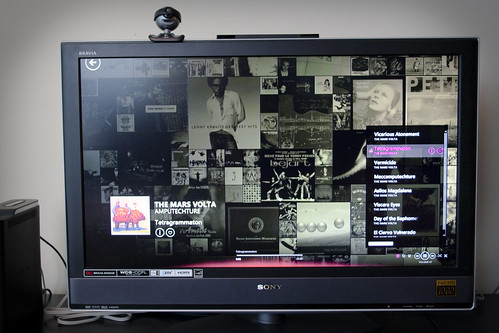 For my music, I prefer to use the Zune Software as a player. This is another beautifully designed program – at least in the graphic department. It just makes any other player look like an ugly Excel spreadsheet.

To manage my music library, however, the best thing I’ve found so far is MediaMonkey. This program alone, which I bought in “gold” version, is the reason I don’t have a Linux installed on my Media Center PC. It makes it easy to manage and maintain a huge music collection when you’re obsessive about tags, album covers and file names.

Other programs include Boxee, which is useful for some things but not quite as appealing outside of the US.

The Media Center PC itself doesn’t store any data beside its OS and programs. All the data (music, pictures, videos) is stored on a Netgear ReadyNAS NV+ with four 1TB hard drives in RAID (which gives me around 2.7TB of space). 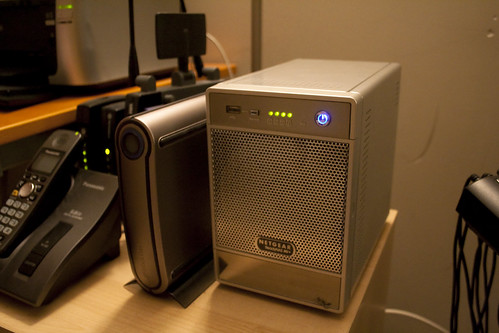 Note the USB hard drive next to it. It receives daily backups of the important data… but I’ll probably write another post sometimes about my data storage and backup strategy (it’s an even geekier bragging subject!).

The ReadyNAS has a decent community going on, and since it’s running some kind of Linux, it’s easy to mess around with it if you’re not afraid to lose your warranty.

I don’t use my Xbox360 as a media extender or anything because it’s noisy and, unlike my Media Center PC, needs to be turned on and off (the failure rate on this console is bad enough that you probably don’t want to keep it running all the time!). I however recently bought a couple of videos off the marketplace on it so it may take a more prominent role in the future.

Bringing it all together

Because I obviously want to control all this from my couch without thinking about it too much, I have a Logitech Harmony 510 universal remote. 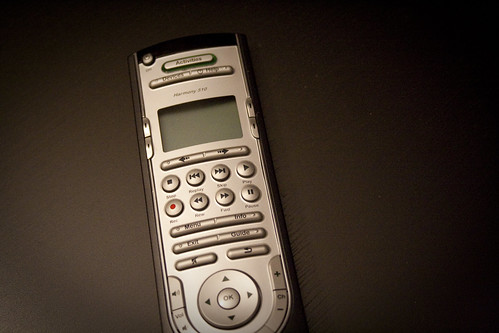 This is not the kind of universal remote where you need to press some switch button every time you need to control a different device. It handles things per “activity”, which means all the buttons can be mapped to various devices so that, well, you don’t need to think about it – “Menu” displays the menu, “Volume Up” increases the volume, etc., whatever device that means controlling.

And that’s it! The next steps are obviously to add some nice sound system, and finish ripping all those DVDs (which includes fighting the region lock crap because I bought some of my DVDs back when I lived in Europe).